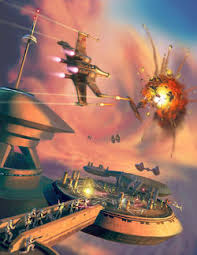 In a group meeting about dreams, a dreamer commented that she was perplexed by a dream she had in which she was two people:

Aerial dog fight dream
In my dream I’m in space and I’m the pilot of a fighter plane—like something out of Star Wars. There’s a battle going on, and I’m on a combat mission chasing after an enemy in another flying vehicle. We’re flying all over the place after each other, shooting at each other, all at incredible speeds. We each sustain damage from the other’s laser fire, but then I score a direct hit and destroy the enemy’s plane. In the next scene I’m surveying the wreckage. There’s debris strewn around, and I see that the enemy pilot is dead. The pilot’s helmet has been ripped off, and as I look closer at the face, I am shocked to discover that the dead pilot is me.

Whatever you perceive is you
The first premise of dream interpretation is that all facets of a dream—anyone or anything the dreamer encounters in the dream—represent some aspect of the dreamer. This does not preclude dreams being prophetic, or being about past lives, or acting as commentaries on someone else. But no matter what ideas the dream may be expressing about an external issue, dreams are always primarily commentaries on the dreamer. Even if the above dreamer had looked at the dead pilot and seen an unfamiliar face—or the face of someone she knew—that individual would still have symbolized some characteristic in the dreamer’s own psyche.

For example, supposed the dreamer had looked at the wreckage and discovered that the dead pilot was a good friend who is a really sweet and loving person. If the deceased pilot represents an aspect of herself, then a good question she might ask herself would be, “Is there something in me that is attacking and destroying a part of my personality that is sweet and loving?” A dream message like that might be grounds for re-examining destructive behavior patterns or ways of thinking.

Instead, the dreamer dreamt that the dead pilot was herself. On the one hand, that simplified the interpretation process—at least initially. There is no need to remind the dreamer that she is dreaming about herself; that is already obvious.

But now, the interpretation process becomes more complicated. When she and I begin the job of looking for metaphors in the dream symbols, we are confronted with a dream character who is not so easy to describe in a few words: the dreamer herself.

On Wednesday, we’ll begin to dissect this dream in earnest to see what special messages it might contain. Stay tuned!

If you enjoy these posts, please feel free to leave a comment.
Or, follow the discussion uninterrupted.
Scroll down to the bottom of this page to learn how.
Posted by David at 08:57