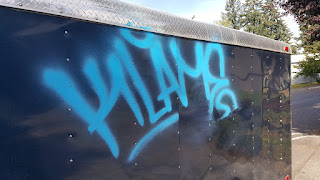 I have been doing some work on my house. One of the contractors left his new trailer out in front, and it was defaced with a spray painted, gang-like graffiti tag. It may be the first time something like this happened in our neighborhood; it is really atypical for here. What’s more, of the dozens of houses and potential “targets” on our street, this trailer was the only item singled out. That makes this incident doubly important as a waking dream.

Whose dream?
So whose dream was it? Was it the contractor’s dream since it was his trailer? Was it the neighborhood’s dream since the event marked a change in the way things are respected here? Or was it my dream since I witnessed the aftermath, and I seem to be taking the whole incident very seriously?

The answer is that the event occurred for the benefit of anyone who was aware of it. Notice I used the word “benefit.” This vandalism did not happen just for the sake of being destructive. When it is understood as a metaphoric event, it has a constructive and helpful message to deliver.

The dream
I live in a comfortable suburban neighborhood where kids ride their bikes and play in the street, and where many people walk on a daily basis without feeling threatened or uneasy. My house is approaching 50-years-old, and in the last year it has needed work. At first I upgraded some of the systems inside—like the heating, the insulation and some of the electrical. Now I have been working on the outside, replacing the roof, redoing the siding and, finally, painting. While the carpenters were replacing the siding, they parked a large trailer out in front to store their tools and collect debris. The day before they finished, we were all stunned to come out and see that, during the night, someone had spray-painted a gang tag on the side of this trailer. This kind of graffiti never happens in our neighborhood. What’s more, this trailer was the only target. There are probably 50 or more houses on both sides along our quiet street, and ours was the only residence “hit.”

Initial work on the symbols
After I got over my outrage and could calm down enough to begin work on the symbols, I noticed two distinct themes running through my dream. (As you read, think metaphorically.) The first theme is all about the work being done on my house—both inwardly and outwardly. There have been several interior systems improved to make it safer, more efficient and more comfortable. Now, the outer shell is being upgraded to withstand the buffets of weather, and to improve appearance.

The second theme is about gang activity. Gangs, to me, represent the disenfranchised, angry members of society. They act out in frustration and impotence, often in very destructive ways.

That is an interesting juxtaposition of themes! We’ll reassemble this dream on Friday and figure out what it was trying to tell me.

If you enjoy these posts, please feel free to leave a comment.
Or, follow the discussion uninterrupted.
Scroll down to the bottom of this page to learn how.
Posted by David at 08:50