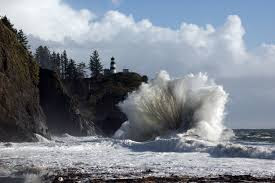 I have been examining a dream about being buried by a huge wave. In the dream, the dreamer wondered at first if he would be able to gain control of the situation. But then he started to breathe under water and realized that he was safe; there was no cause for concern.

Dreams come to us in order to provide us a glimpse—a snapshot—of ourselves at a given moment in our lives.  When our lives are running smoothly, we dream, but our dreams make only a small effort to bring themselves front and center to our attention.

By contrast, when we are ambivalent about something, then our dreams express themselves more emphatically. They do this by using startling imagery.

The majority of these startling dreams are trying to make us look at a dilemma within ourselves: Are we conflicted about a decision? Are we fundamentally against some action which we are pursuing just from momentum? Are there philosophical or spiritual issues that we haven’t fully thought through?

But that’s not all that dreams do. They can be equally forceful in letting us know about a change we have made that is bringing constructive results. The irony is that, even with these encouraging, congratulatory dreams, the images are unsettling. That is because the dreams want to be remembered!

That was the case with this dream about being suddenly submerged by a giant, tsunami-like wave. (You can scroll back to the last three posts to see how we analyzed this dream.) In the dream the dreamer felt out of control and momentarily battered by the event. He wondered if he was going to die. Then he realized that he could breathe under all this water.

From the perspective of interpretation, the big question was what the water represented to him symbolically. Was it good or bad for him?

His descriptions of the water were telling. His first comment was that the water was about “stress.” But then he went on to talk about how it was “awesome,” had a life of its own, was larger than any other aspect of himself, and was something he couldn’t live without. To him, it was a vast, expansive area within himself that he was just now experiencing fully, after only “getting his feet wet” before.

I asked him what was going on in his life. He explained that, at 20-years-old, he had been focused on studying, sports and, more recently, girls. He described himself as well grounded, perhaps even fixed in his ways and not particularly adventurous.

Then he met his current girlfriend whom he described as nearly antithetical to himself. She was constantly exploring—often outrageously. She was fearless, outgoing, volatile, and lots of fun. He found her a breath of fresh air in his life. While he grounded her, she was opening him to whole areas of his own persona that he had previously been blind to. And his dream was admonishing him to stay the course of this new exploration!