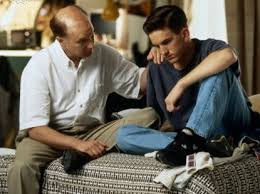 Sometimes dreams work in tandem. The current dreamer has had a sleeping dream and a waking dream simultaneously. The two dreams seem to have nothing in common. One is about being cut with glass, and the other is about an ongoing conflict with the dreamer’s teenage son.

But when the symbols are analyzed as metaphors, the messages of these two dreams are far more similar than they seemed at first. Here’s waking dream.

Restated dream
There are two parts of me that are constantly fighting with each other. It’s a lose-lose situation. Nobody wins. One part of me is nearly an adult, my offspring-self. It’s my flesh and blood. It has a good brain. It’s analytical and logical. It performs well in a learning situation (school). It knows how to help the other parts of me understand difficult things. I’m honored to be associated with this part of me. But this aspect of myself seems to be attracted to frivolity, things that are more fun than meaningful; they’re lacking in substance. This part chooses to work with its hands to make things out of clay. It sings with a group within myself. This part is making food to eat. It is making choices that won’t promote it. It ignores higher education, accelerated programs and serious learning. It chooses not to use its brain power to compare itself to other parts of me. I’m frustrated.

The dreamer’s thoughts
This dream is about ambivalence between obsessively competing to succeed and needing to relax. I asked the dreamer if that conflict was something he struggled with. He replied that the competitive part of him was such a powerful influence in his life that he rarely took note of what else he might be trying to tell himself. Perhaps the only way for the other parts to get his attention was through a dream, I suggested. He became thoughtful, especially when he realized that the scenario was now playing itself out in an ongoing struggle with his son.

With that understanding, I turned his attention, again, to his sleeping dream, to show him the similarity of its message. Here it is.

Restated sleeping dream
I need to escape from an unknown threat inside of me. It’s like a mystery. I feel as if my life is in danger. Getting away from this part of me would bring me back to calmness. There’s a barrier in me, but it’s not impossible to get over. It takes work, but I can succeed. In fact, I reach the first major milestone. But I feel excruciating discomfort. This barrier in me is designed to repel and cause injury. It’s surreal. Things are happening that really can’t. I am examining where my pain comes from. Everything inside of me is exposed in an awful wound. It’s hideous. I am looking at my own inner workings. While most of these kinds of things happen at a distance for me, this time there is shocking realism. I am debilitated, almost paralyzed.