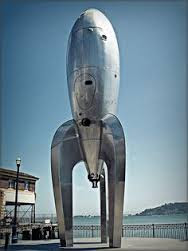 This week I’ve been examining my own dream about an 11-year-old boy who is trying to fly a rocket ship. In addition to the typical “Tell me about it” question that I ask in order to reveal the metaphoric meanings of the dream symbols, I also asked my dream class if anything about the dream was particularly striking. Below are the restated dream, followed by the class comments.

My dream metaphorically restated
There is a part of me that has created an artificial community inside of myself in order to exist in a hostile environment. I’m far away from my natural home base. The new place is a thriving, interactive community with lots to offer. And I am dealing with a part of me that is a substantial vehicle for traveling vast distances at great speed. But the part of me piloting is completely inexperienced and involved in a task that is beyond him. I see the potential for disaster. But the pilot part of me has not a care in the world. He thinks it’s a lark, a diversion without consequences. I have to negotiate two parts of a hookup that is also a foundation. The pilot part of me tried but got it wrong at first. Then, despite everything, he did OK and my worries went away.

The class observations
*  Right away, I noticed that there were two aspects of yourself represented. One of you was the observer and the other was the active part of you. And there was a kind of separation, a lack of being together.
*  I noticed that, too. The active part of you is presented as being youthful and inexperienced, and then there is a more mature part, but it is fearful.
*  There’s an element of masculine and feminine energy in this dream. You even used the words “male” and “female,” and there is an effort to have them join together—even with quasi-sexual imagery.
*  The masculine and feminine do finally come together with no residual damage. It’s like there’s a unity at the end that wasn’t there to start with.

Further analysis
There were several helpful insights. But what is striking is that there are two references to masculine and feminine energy. One of these comments correctly states that I even used the words “male” and “female” in my initial telling of the dream.

There are few symbols that I consider so consistent in their meanings that I treat them as archetypal. But masculine and feminine energy is one of them. Simply stated: The feminine inside of us is the great intuitive “seer.” Feminine dreams the dream of what it wishes to achieve. It’s as if it creates a blueprint which it hands to masculine. The masculine inside of us is the great builder. It receives the blueprint from feminine, and its job is to manifest—make real—feminine’s idea.

Think about that understanding in relation to this dream. In any case, we’ll put it all together tomorrow.