Two Dreamers and One Dream Symbol With Opposite Meanings 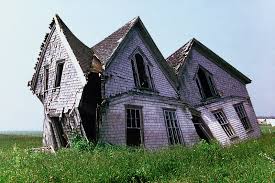 The Topic of this Post
One thing I am adamant about: Don’t generalize the meanings of dream symbols! It’s the reason why those books for sale in the checkout line of a grocery store—the books that offer so-many-umpteen “meanings” of dream symbols—are worthless. This was dramatically confirmed for me last week when I spoke with two dreamers, both of whom dreamt that they were in their father’s house.

The Main Principles of Dream Interpretation
As we examine their experiences, keep in mind the two principles of dream interpretation: Dreams speak in metaphors, and all the metaphors in a dream highlight some aspect of the dreamer.

The Symbol in Question
The symbol of a house is really common in dreams. Generally, a house can be defined as “where you live.” Metaphorically, it can mean where you live in your thoughts, or it can be an expression of what’s on your mind. But beyond that generality, it is really important to explore what the house looks like and how the dreamer feels being inside the building.

Why the Same Symbol had Opposite Meanings
One of the two dreamers grew up in a Roman Catholic family which provided her with loving, stable support throughout her childhood. Her religious beliefs would be irrelevant in just about any other dream. But in this case, dreaming that she was “in her Father’s House” was tremendously significant to her; that is nearly a direct quote from Jesus who refers to the many rooms in his Father’s house. For her, the image of being in her father’s house not only conjured up a sense of familial support, but was further an image of the highest level of her own spirituality. For her, being in her father’s house represented the epitome of centered well-being and peace.

The other dreamer—also a woman—was a victim of childhood sexual abuse at the hands of her father. When she dreamed of being in her father’s house it had exactly the opposite connotation. It meant pain, humiliation, degradation and, worst of all, violation from the individual who should have offered her the most protection.

How the the Two Dreamers Related in opposite ways to the Same Symbol
Now, let’s go back to what I said in paragraph 2 of this post: All dream symbols represent some aspect of the dreamer. For the abused dreamer this dream was a visit to a part of herself that had been ‘housed” secretly away for years. She was ready to begin cleaning out this house, and as painful as the experience promised to be, this dream was the beginning of her bringing her issues into full consciousness--the beginning of her healing.

For the Catholic dreamer the dream represented a reward for a great deal of work she had already been doing. She found herself “residing in” a part of herself that was all about a sense of wholeness, well-being and her connection to what she thought was most valuable in life.

Two dreamers, one symbol and exactly the opposite meaning. Let me know your own thoughts on this topic.
Posted by David at 15:06