Here’s a dream and its interpretation: 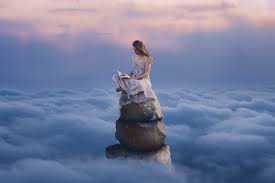 A dreamer dreamed that she and her husband were taking a test. Her husband zipped through and finished in no time. She was doing well herself until she got to the second page of the test. Then she noticed that the questions being asked called for answers that weren’t as direct and easy as they had been at first. As she was working, she looked up and saw a magnificent figure in a beautiful robe. She knew that he was of mystical, spiritual nature, and she wanted to converse with him because she knew he had great things to offer her. But she also knew that she couldn’t talk to him until she finished her test, and that was frustrating. She was afraid he’d go away before she was done, even though he showed no signs of leaving.

What follows is the interpretation that she and I came up with. Keep in mind the two principles of dream interpretation: Dreams tend to communicate in metaphors, and all characters in dreams—living or inanimate—represent aspects of the dreamer.

The fact that both she and her husband were taking the test implied that both her feminine and masculine aspects were being tested. Her masculine side—the doer, the asserter—finished right away. But the feminine side—the intuitive, internal creative energy—found the test more of a challenge. Waiting for her, when she was done, was a magnificent, spiritual, mystical part of herself. But before she could be in communication with this mystical aspect of herself, she needed to finish her test.

She and I talked about the masculine and feminine parts of the dream. She told me that the symbols made perfect sense in her life. She was embarking on a new responsibility, one in which she would do a great deal of counseling of others. She said she was really anxious to get going and set things into motion (her masculine side) and that she had the physical/scheduling framework for her new role in place. But she also knew that she needed more work on certain of her own attitudes (the feminine side). She knew she would be a better counselor if she developed a stronger foundation in one or two areas of her approach.

I advised her to take her time. This part of her testing needed special attention and she should not rush it. I also assured her that, since the magnificent robed figure was her own spiritual self, it wasn’t going anywhere; it would most definitely wait for her and she would have truly fulfilling dialogue with it when the time was right.

What a beautiful dream! Let me know what you think; leave a comment or ask a question. I'm happy to interact with you.
Posted by David at 07:53